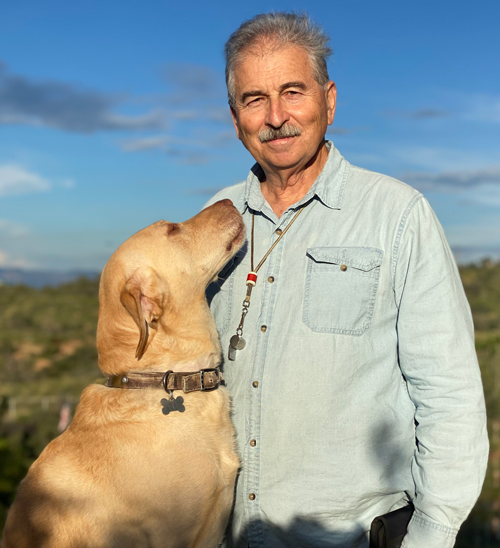 Web has always been passionate about all things dogs! He began in his teens by self-training birddogs. He studied art in high school and college and spent any available time surfing and hunting birds with birddogs. Additionally, he worked as a taxidermist after teaching himself how to mount birds in his early teens. His early employment was working in taxidermy shops as a bird specialist. Ultimately, he shifted to sculpting taxidermy forms and working in modern plastics and fiberglass.

By his early twenties he was working as a commercial sculptor specializing in animals with his work being reproduced in wood, cast stone and plastics and manufactured and distributed nationwide. He and his wife Nicole moved to Arizona in the mid-1980’s and Web graduated to sculpting dogs and other animals in limited edition bronzes. All the while, he continued training and hunting bird dogs. Ultimately, he shifted to running a training kennel in southern Arizona for a number of years, working full time training hunting dogs and guiding quail hunters during the season in the wild lands of southern Arizona.

During that time he was approached to write a book on bird hunting in Arizona. The resulting WingShooter’s Guide to Arizona, Upland Birds and Waterfowl was published in 1996. The companion book WingShooter’s Guide to Kansas, Upland Birds and Waterfowl followed in 1998. A third book Bond of Passion: Living with and Training your Hunting Dog was published in 2008 and won an Excellence in Craft award from the Outdoor Writer’s Association of America in 2009. As a member of the OWAA for over twenty years, he has written and photographed extensively for the freelance writing market in magazines and other publications on varied topics with a focus on hunting dogs and bird hunting. In addition, he is a nationally recognized expert on aversion training for dogs.

Web has pioneered aversion training techniques that have revolutionized the process of keeping dogs and their people safe from some of the dangerous things humans and dogs can encounter in the natural word. He has worked as a pro-staff member for the electric training collar industry and is an expert in the use of electric collars for dog training. Web has spent three decades doing group trainings, public appearances, grand openings, and large group seminars educating the public nationwide on how you and your dog can travel safely through the great outdoors.

Web Parton is a writer and public speaker living in southern Arizona with his wife and their dogs. He has covered environmental and political stories as a reporter and worked at the county and state level on environmental and political issues. Additionally, he is a nationally recognized trainer working with people and their dogs. As such, he has spent a good portion of his life on the road conducting group dog trainings and supporting training products for various corporations.

He has presented in front of large audiences and done television appearances in promotion of products and services. Through his years of work for both corporations and not-for-profit agencies, he has extensive experience with public speaking and exhibits a natural ability to connect with the public. His sense of humor makes it possible to discuss difficult issues in a disarming manner and increases effective communication.

Web wrote for the local paper, for which he won the 2005 Best News Story of the Year award from the Arizona Newspapers Association in the non-dailies under 3,500 category. Additionally, he has contributed articles to various sporting magazines and written the following non-fiction books: