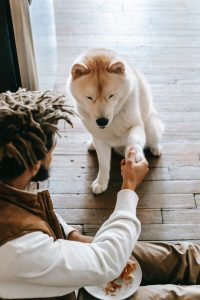 A dog and a man walk into a bar.  Both take seats side by side at the counter and the man begins a long one-sided conversation with the dog.  He explores the meaning of life, the burdens of a mortal existence, and how lucky the dog is that he’s just a simple dog, uncluttered with human burdens.

For the dog’s part, he ponders the man.  The dog maintains focus on the man’s eyes as the philosophical musings continue.  The topics offered by the man just don’t seem that important to the dog.  The dog weighs each topic separately. As this is HIS human, he tolerates the babbling.  The dog leans in, keeping body contact with him.  He maintains eye contact with the man as he constantly assesses the host of chemical cues and body language the man projects.  The dog senses that the man is going to go on for a while, so he settles in and watches while the man eats from the bowl on the counter in front of them and periodically lifts the glass to his lips.

The man queries the dog on all of these important matters going through his mind.  The dog listens intently. Again, while these matters are important to the man they are of no consequence in the dog’s world.  Even so, the dog faithfully explores each topic point by point.  He reasons through and  assesses each one.  Ultimately, realizing that he has nothing to say regarding the topics at hand, the dog does not respond. The dog’s eyes, however, continue to watch the man’s hand as it travels from the bowl to his mouth and then back again.

The man continues to explore other subjects, meandering through yet another host of different thoughts on politics, government, religion, sports, entertainment, and the like. Again, when the man tries to elicit a response from his dog, the dog remains mute.  The reaches out to pet the dog and jostles his ears. He tells the dog it is a shame that he is just a mute dog who cannot contribute to the conversation. The dog tilts his head and looks at him quizzically. Responding to his dog’s expression, the man says, “What? You aren’t mute?? Do you have something to say?”

Finally, the dog hears a question addressing something on which he does have an interest and opinion. The dog now speaks and questions the man, “Are you going to finish what’s in the bowl?”

For answers to this, and any other question you might have about training your dog to think for himself and be an essential free range dog companion on your daily outdoor adventures, contact us at freerangedogs.com   We have what you’ve been looking for!