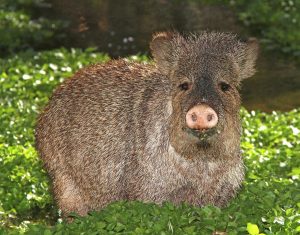 While doing a quick walk-through at a local used sporting goods store, I overheard an animated conversation up front by the cash register.  As I scanned the shelves, I heard a familiar story unfolding.  A middle-aged man had stopped by the store after having a run-in with a herd of javelina while hiking with his dog here in the desert Southwest.  He was very worked up, and the young man showing him an assortment of used golf putting irons was doing his part to feed the anxiety.

Javelina are feisty little critters that live in groups of 6 to up to 40 animals.  Locally, they are referred to as pigs but they are, in fact, collared peccaries.  While they look like pigs, they are a different genus altogether. This is due to their teeth structure- an adult javelina has a truly impressive set of canine teeth.  As a result, javelina are capable of inflicting lethal damage, which on occasion they don’t hesitate to do, particularly if there are newborns in their group.  Around dogs, a male javelina can be very aggressive. They will woof, fill up with air, and charge forward to do battle.  To them, a dog looks like a coyote intent on swooping in and grabbing one of the herd’s newborn piglets.  When javelina get into that state of agitation, they can be remarkably bold and unafraid of humans.

We almost lost a female English setter to a single javelina bite years ago.  While we were quail hunting, she blundered into a silent herd and immediately wheeled and ran, but it was too late.  It only took about 2 seconds to inflict damage.  There was a lot of blood.  We couldn’t stop the bleeding and she would have bled out without constant pressure on the wound.  Nicole and I took turns keeping a pressure compact on the site of the bite. We laid her down in the front room by the wood burning stove and sat on the floor beside her.  It took about five hours before the blood clots held and the bleeding stopped. In this case, our story has a happy ending in that she healed completely and went on to live a long life in which she was able to avoid further contact with javelina.  Clearly, javelina and dogs don’t mix and are best to be avoided.

As for the rattled dog owner in the store, he thought a golf club would be just the ticket to keep those pigs at bay. The twenty-something salesperson assisting him also thought it was a great idea! As I was heading toward the exit, I passed next to the cash register where the gentleman was making his golf club purchase and the pig bashing conversation was continuing in full swing.

The little voice in my head warned me to not make eye contact and to just keep walking out the door.  But then I thought about how badly it might go for the man and his dog on their next hike.  In my mind, I visualized the pair as he swung that tiny little putting iron while a group of three male javelina tag-teamed them and chewed on his dog until it bled out.

I asked the man if he was referring to javelina? He confidently told me he had just the plan for the “damn rodents,” with his implication being they could be dispatched like rats.  I mentioned that actually, they aren’t rodents, although this is a very common misconception.

“They are rodents!” He corrected me, twice.

“Be that as it may,” I said, “they may look a little slow and stupid twenty yards away. But when they are three feet away, they are lightning quick. Three feet is the length of the putter you’re holding. If you let them get that close to you, you and your dog are in serious danger of getting hurt.”

The most important thing needed when encountering a dangerous animal on the trail is to buy yourself some time and to get as far away from it as possible. The golf club, unfortunately, requires one to get up close and it would also be an uncomfortable addition to a hike.

I offered that instead, to buy time and create a safe distance, he might consider using bear spray.  Two-packs are currently available at our local Costco and there are several YouTube videos that can be viewed for education on the proper and safe use of bear spray.

He thought about it and stated, “I’m worried I would end up spraying my dog.”

“That’s a distinct possibility,” I replied.

The benefit in this situation, however, would be creating distance. Bear spray is used as a fog from a distance of 20 feet away.  It allows you to maintain that margin of safety no matter what type of calamitous critter you and your Free Range Dog might encounter while out in open country. If you pay attention to which way the wind is blowing, you should be able to avoid the fog you’ve created, giving you and your dog the time and opportunity to get away from the  danger.

Let’s be clear. We started out talking about pigs in the desert, but this information applies to anywhere you turn your dog loose to run.  You might encounter a moose, bear or lion in the North American mountain west. Or, these days, you might come upon a pack of urban coyotes in any large city in North America.

During my time in the desert working as a quail hunting guide, I saw just about everything one might encounter.  I once had a yellow lab, Jackson, out working the grass upland along the line of a desert wash.  Unknowingly, he had ventured too close to a newborn calf hidden in the brush.  The calf’s mom suddenly appeared out of nowhere and head-butted Jackson with a full head-on broadside flat to the ground.  The cow was in the process of trying to crush him when the ground beneath the pair of them suddenly gave way.  Luckily, Jackson had been right on the edge of the shoulder where the grass bench fell into a sand wash.  When that mama cow pushed her weight into the ground, the ground gave way and he was able to escape. From that point on, Jackson gave every range cow he came across a wide berth.  With most dogs, after an initial exposure to a dangerous animal, they figure out they don’t want to be anywhere near it.  The tricky part, however, is to get them through their first exposure uninjured.

On occasion, some dogs will develop a grudge match with a particular animal and become aggressive about approaching them.  That is a problem that needs to be addressed and which can be fixed with training.  The human with the dog when the first contact was made with the dangerous animal may have had something to do with the grudge match developing. The human may have done something like trying to beat it with a putting iron.

So just don’t! Remain calm in these situations and mirror that for your dog. Leave the area as soon as you realize you have unwelcome company. Educate yourself and be prepared for  the wildlife you might encounter in the areas where you hike and the recommended methods for keeping yourself and your canine companion safe. Save the golf clubs for the golf course and the grudge matches for the WWE.

Go to freerangedogs.com to schedule an online consultation or in-person training to learn more about hiking with your canine companions and keeping both of you as safe as possible.